Recently I’ve got the luck to obtain a free month of Grammarly Premium account. So I decided to grasp this opportunity and give it a test drive to see whether it is worthy of its $12/month or not.

Please note that this text was proofread by Grammarly. So if you find any typos, mistakes and errors don’t blame me. Go to developers of Grammarly. 😉

First of all, I’d like to say that the guys did a good job creating an excellent design and usable interface. After I had set up the Grammarly’s Chrome plugin, I’ve got their small logo in the right bottom of almost any edit box on a web page:

And if I make a mistake it helps me to correct it right there:

That’s nice, but it doesn’t always work well with complicated editing boxes like the visual editor in WordPress (but basically it does)

and, unfortunately, it doesn’t work with my beloved Google Docs yet.

Also, Grammarly gives you an opportunity to edit your text in its own editor and then paste it back into the host application’s control:

Ok, actually I’d not like to focus on UI-related issues a lot here. My goal is to test how much Grammarly is useful for improving your writing. So let’s switch to testing what it can correct and what it doesn’t.

There are five types of checks Grammarly performs on your text: contextual spelling, grammar, punctuation, sentence structure and style. In this post, I’m going to test the first thee of them.

Here Grammarly checks for “spelling errors and correctly spelled words used in the wrong context, such as erroneous use of lose/loose, affect/effect, lie/lay, etc…”. BTW, the interesting thing here is that though I took this sentence from Grammarly, it still scolded at “erroneous”, suggesting me to put an article before it.

Let’s start with the obvious example, just to see how it works:

This time, it worked as advertised and it’s cool! Let’s try a different case:

As you see with homonym “can” it was not so smoothly. Grammarly thought that I typed “can” twice in a row. Basically, it’s not a problem, you can simply review this case and if you believe that you’re right just tell Grammarly to ignore it. The worse case is when the grammar checked doesn’t see an error:

Here Grammarly successfully found a typo in the first sentence but failed to find it in the second one. So you have a slight chance to make your dear one a deer if you’re not careful.

But it is interesting here that though Grammarly felt that it is something wrong with “lite” it still suggested a strange (for me) substitution. As far as I know there is no such noun as “late”, so how Grammarly suggests using it after “the”?

By the way, when I was writing the previous sentence I made a typo “But it is interesting here that thought Grammarly felt that it is something wrong…“, but to my chagrin, Grammarly was silent about it. This also doesn’t speak in its favor.

Ok, let’s draw a bottom line under contextual spelling tests here. I’d say that though Grammarly may greatly help you to improve the quality of your texts, you should not trust it blindly. It’s not a cure-all against your carelessness. You still need to re-read your texts even if Grammarly says they’re ok.

But don’t think that Grammarly is useless in this regard. Actually, while I was writing this text it did pointed me to some simple but unfortunate misprints. Without Grammarly, I could miss those typos even if I skimmed over the text again. So definitely it makes writing more simple and comfortable.

This feature “checks text for subject-verb agreement, misused articles, consistent verb forms and tenses and many more grammar rules”. In other words, Grammarly is able to find the following blunders:

That’s excellent and helpful, but let’s see what about some slightly complicated cases:

Here Grammarly correctly found the misuse of plural “are” with “each”, but overlooked using “everybody” pronoun with verbs “have” and “are”, that should be singular verbs “has” and “is” correspondingly.

Let’s now see how the grammar checker deals with articles:

In this test, Grammarly correctly pointed to missing definite article before the mountain name, but let “the” before a city name go unnoticed. Of course, in some cases “the Edinburgh” may not be a mistake, but I’d prefer Grammarly to pay my attention to it.

I also tried to test it on some errors related to the sequence of tenses and conditional sentences, but it seemed that that Grammarly couldn’t handle those grammar errors too. For example, it overlooked missing “had” in “I did not know that he lived in NYC before the war” and some mistakes in “Had you call me, I would come”. Hm, maybe I require too much and today’s artificial intelligence is not intelligent enough for this?

But again, Grammarly still successfully corrected me in many other simple cases that I didn’t mention here (like missing -s in the verb’s ending and etc). So surely it is able to improve your grammar and correct some mistakes made through lack of attention.

As far as punctuation is concerned, Grammarly “checks for missing or redundant commas, periods colons or semicolons”. That should be particularly useful for me since I’ve never been good in English punctuation. For example, I didn’t know that in American English they use comma in lists before “and”:

When I switched my English settings from “American English” to “British English”, this warning disappeared. That’s nice. Here are more tests:

Here Grammarly correctly pointed to missing comma after the subordinate clause in the first sentence but overlooked missing commas around non-defining clause “which arrived after just five minutes” (such phrases usually add extra, non-essential information about the noun or noun phrase and often being marked by commas) in the third sentence.

The second sentence here might be a hard case for Grammarly, but according to Cambridge Dictionary “when we use subordinate or non-finite comment clauses to give further details or more information, we commonly use commas to separate the clauses”.

Anyway, according to my feeling, Grammarly really helps with complicated English punctuation and is really useful here.

Some other useful features

I really love that Grammarly provides extended grammar explanation for each case: 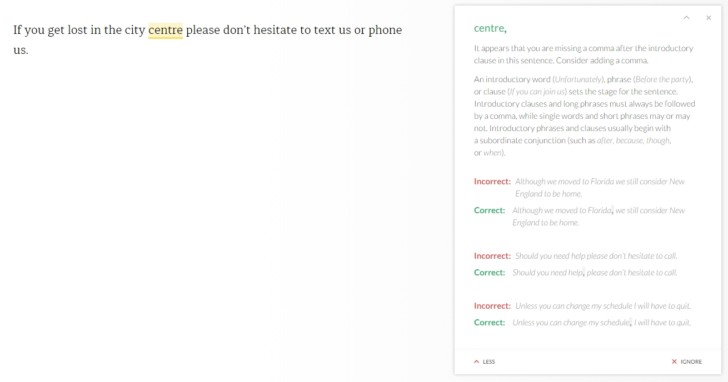 It not only helps to understand whether you need to apply this rule here and or not but also makes your English better. The guys did a really good job here.

Another attractive feature of Premium account is that Grammarly can check your text for an unoriginal excerpt. It may warn you to add some credits or to revise your text to make it unique if you’re a rewriter. In my case it fairly noticed that I took a sentence from some other source: 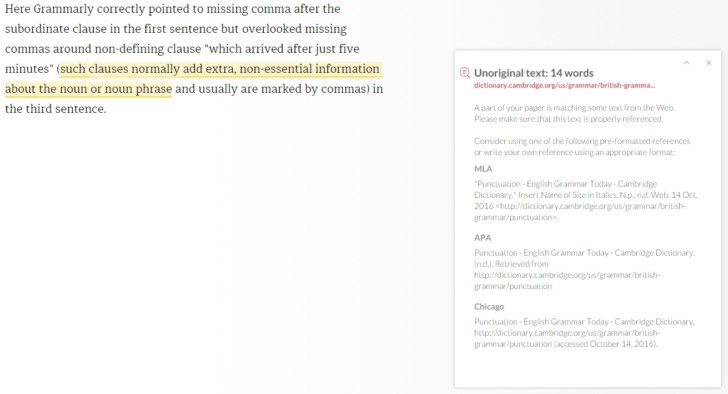 I also verified whether it checks for plagiarism against common texts only or against any other writing on the web. When I tried to edit a text taken from my old article, it also warned me that this text was taken from another page on the internet, giving the link to that page. But, on the other hand, sometimes Grammarly is too captious with plagiarism check, grumbling at just an eight-word expression.

Another really nice feature is a synonym lookup. You can double click on any word in your text and Grammarly will suggest you a set of synonyms for it. Then you can easily replace this word with any of proposed variants by simply clicking on one of them. This is an indispensable feature for rewriters:

Well, after this short acquaintance with Grammarly I can tell that it’s a must have tool for anyone whose job is related to writing texts in English (like us, bloggers). Of course, it will not solve all problems and correct all your mistakes, but it definitely will make your life easier. None of us are safe from stupid mistakes and typos and here Grammarly will stand you in good stead. But don’t take it as a cure-all. You still don’t need to rely on it blindly meeting all its suggestions.

Whether it’s worthy of those $12 (or $30 if you pay monthly) per month depends on your budget. If your work is all about writing texts then, I think, it’s an insignificant amount for such a helpful tool. Also if your English is not sufficient, Grammarly may pay off by putting your writings to rights.

Feel free to share your thought and experience in comments.

[Total: 2    Average: 3/5]
« Should We Have This Meeting? – by Wrike project management tools » Mac Cleanup Hints that You Should Know About