I downloaded OneDrive Windows version to use on my PC. You also can download the app from this official page. The file is only 5.73 MB. It takes few minutes to install the app. 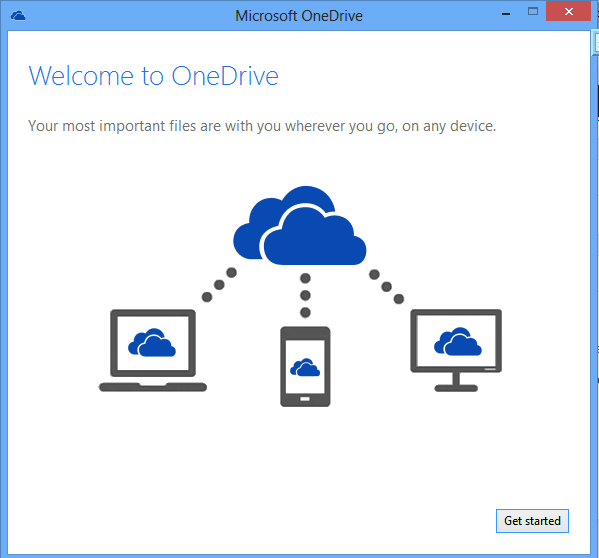 OneDrive is simple and easy to use on computer. But at first it may mess-up things with internet connectivity issue. 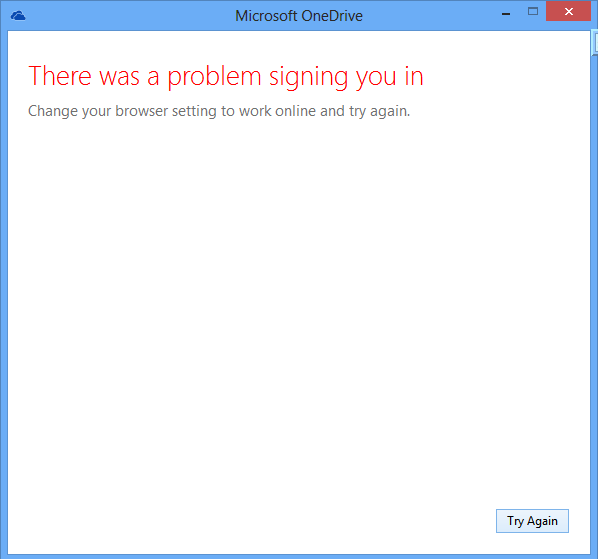 It required me to open Internet Explorer which action took IE online, then the OneDrive client allowed me to sign in. 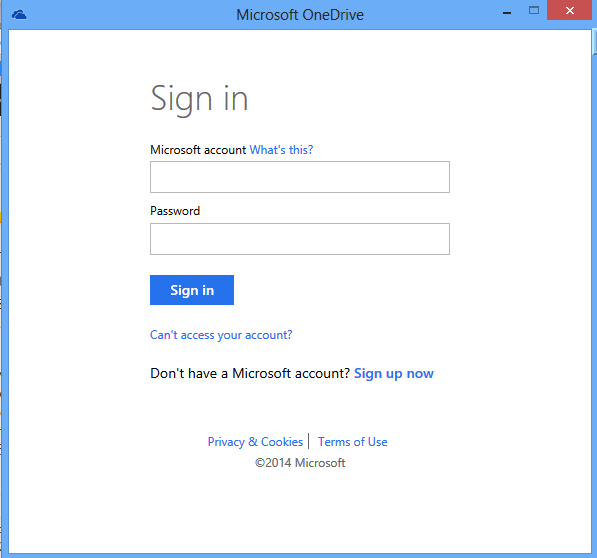 Signing in to OneDrive PC app appears to be little bit tricky. Or it may be simply a bug too. Whatever may be the case, the process should be user friendly.

The software creates a shortcut on the start menu. A shortcut on desktop can also be found. The ‘OneDrive’ home folder gets included in the ‘Favorites’ folder list on the left side of ‘Computer’ drive interface. Double clicking on the ‘OneDrive’ shortcut will take you inside the home folder. 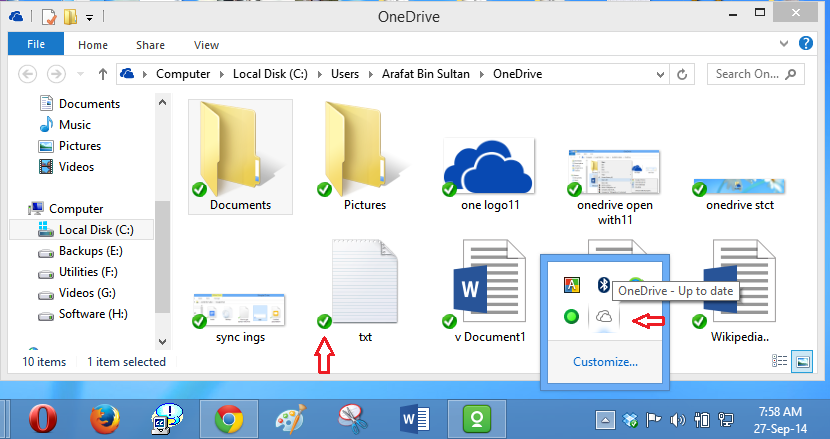 As expected, if you paste a file inside the ‘OneDrive’ folder, that will be sent to its web server and get synchronized with other linked devices. 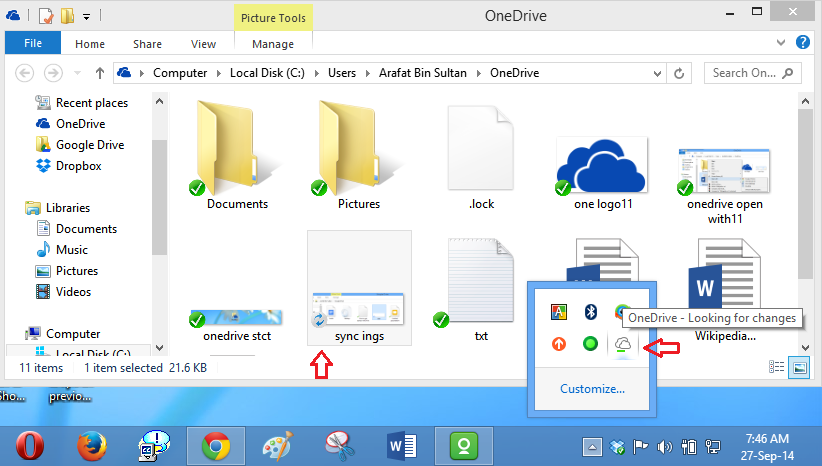 If you paste an MS Office document file on the OneDrive folder, and open it within there, the file will be opened using MS Office desktop app with connecting to OnDrive server. It’s a great thing that was missing from Google Drive’s desktop app.

When OneDrive desktop app synchronizes files, its system tray icon gets a green bar passing under the app’s white cloud symbol. If you hover mouse on the OneDrive system tray icon, it will show you sync information.

In Google Drive desktop client, I seen that the Google document format files always opened on the web. But in Microsoft OneDrive, the documents can be opened with the native MS Office apps and it uses internet connection to adjust the updates with server.  Microsoft did not include any special context menu item like Google Drive’s ‘Share and View on the web…’. I think, options for file sharing, web view etc. could add value to the OneDrive PC app.

Yes, I know, Microsoft leveraged its home benefit in this case, but Google might allow us at least opening the document with MS Office suit. That did not happen in Google Drive.

OneDrive also adds dedicated context menu items like Google Drive and Dropbox. You can use OneDrive context menu options to share files, view them on the web and diagnose problems. 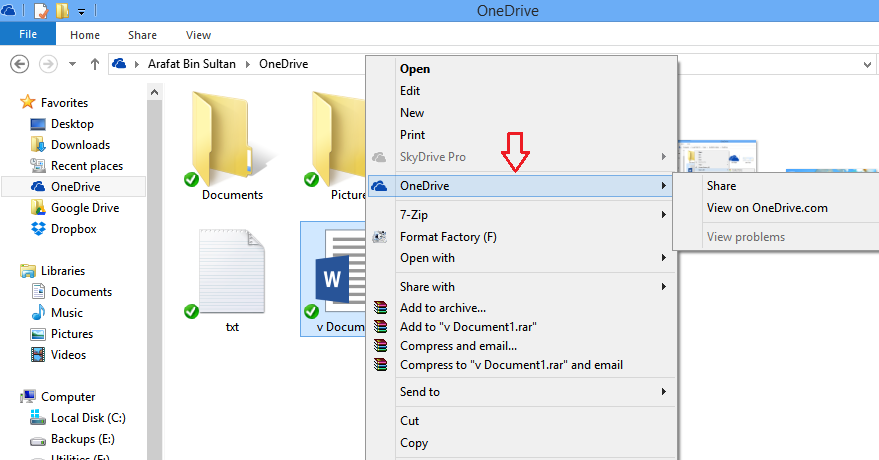 To open the menu list of OneDrive desktop app, just right click on the OneDrive icon located at system tray.

There you will see some options like opening the OneDrive folder, settings, managing storage etc. Using ‘Manage storage’ option you can increase your OneDrive cloud storage via purchase, referrals etc. The ‘Manage Storage’ option will redirect you to OneDrive’s online page. 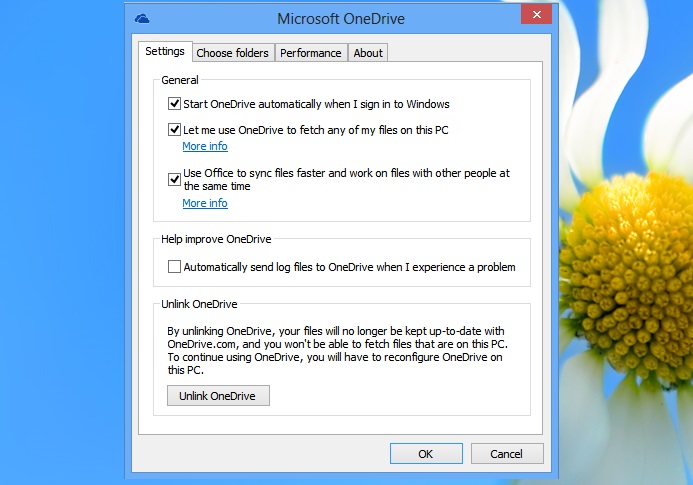 In the ‘Settings’ menu, there are some very basic preferential options like whether starting OneDrive with Windows or not, setting up certain sync folders, whether to use MS Office 2013 with OneDrive desktop client to enable the editing advantage etc. In the ‘Performance’ tab, you can opt-in or opt-out batch uploads. Enabling this feature will consume more bandwidth to improve upload speed.

OneDrive for Windows desktop offers a modest feature list and a user interface that performs. If you are just going to use it for synchronizing your files among other devices, the app does this without a glitch. However, Microsoft should fix the sign-in issue and make the overall app more stable.

So, this was my experience with Microsoft OneDrive Windows desktop client. I’ll share my desktop experience with some of the other competitors of OneDrive in future. Hope you’ll be with me. Thanks a lot.