Remote work is not an innovation. Millions of people all over the world are employed by companies that don’t require office attendance and which allow them to work from home. However, remote working also has its downsides.

In most cases, the employer is unable to closely monitor the daily activities of their remote workers. Hopefully, they are actually performing their duties, but they could be procrastinating, watching movies, skiing on social media etc. If employees receive an hourly rate rather than being paid per project, their company risks losing substantial finances due to possible lack of diligence of its remote employees. This is exactly where Time Doctor comes in – the ultimate remote employee monitoring software.

Time Doctor was developed with an aim of providing employers with an effective time management software, which allows to closely monitor computer or mobile activity of their staff, as well as the current project statuses. During the years Time Doctor creators have been constantly adding new improvements and features to ensure the smooth coordination between employers and employees, such as – Reporting, Ineffective time use report, Integrated payroll, etc.

Let’s dive deeper into the capabilities of Time Doctor.

This employee time tracking application was built in two parts: 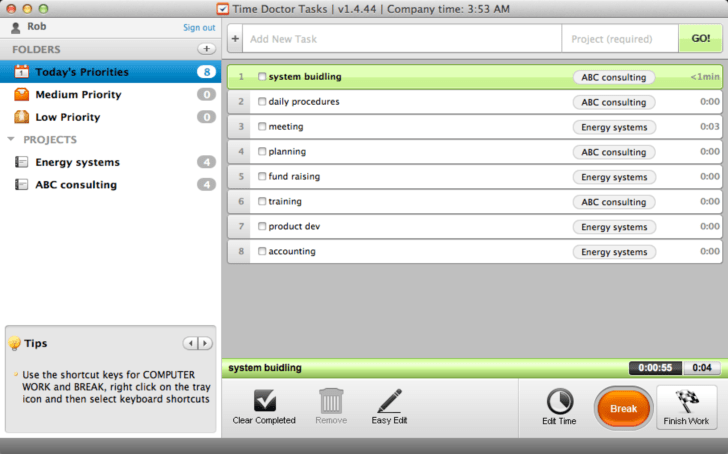 Access to server data is not only granted to the company manager but also to the employees themselves, so they could analyze their own effectiveness and areas of improvement. There are subtle differences in dashboards and settings menus for managers and employees.

Another important feature is Client access – subscribers can provide access to their clients, who then can track the progress of their projects within your company’s dashboard. This develops transparency and trust.

This is the main function of the application, which allows employers and their staff to track time worked on a particular project or task. Let’s imagine an employee spent 2 hours on a particular task, but to reap higher rewards he has claimed 5 hours. Or a task that would take a maximum 2 hours has taken the employee 5 hours to complete. In both scenarios, the company suffers a loss. But it’s time to eliminate those risks. 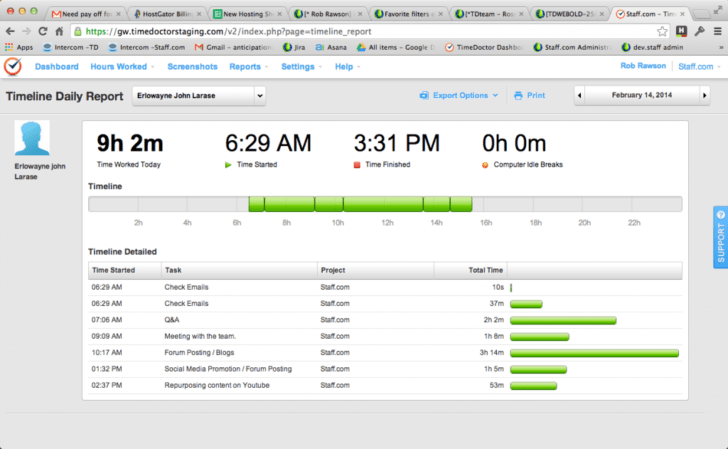 In essence, Time Doctor is a time monitoring software, that helps employers quickly verify the validity of employee reporting – are they delivering what they say they are, or are they hiding something. For this reason, the Time Doctor application offers the following functions: 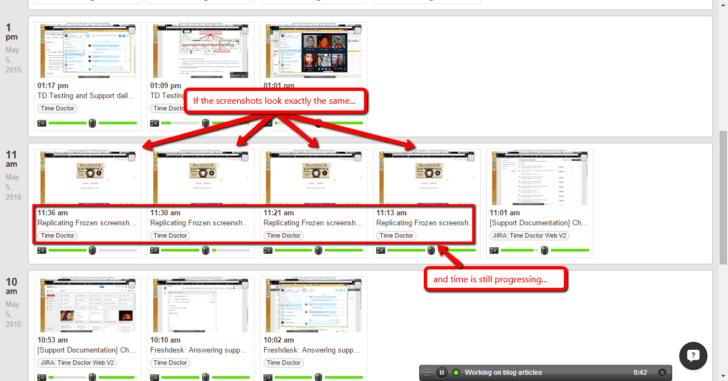 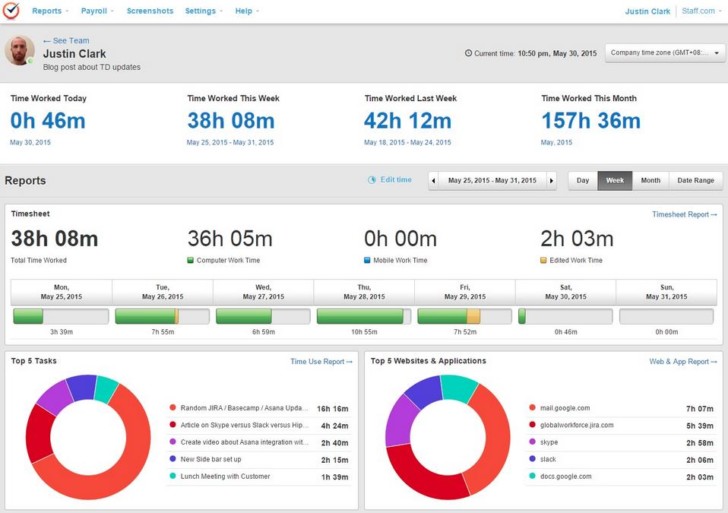 Time tracking and activity monitoring features are not only beneficial to the employer, but also to the employee. The employee can see for themselves whether they are being efficient by looking at the total time spent on a particular task or total time spent on breaks during the week. It is believed, that when an employee knows they are being tracked, naturally their work becomes more productive.

Time Doctor developers have given special attention to the particular preferences of various companies. Therefore, various configuration settings are available to tune the system the way a manager wants:

Possibility to integrate with other services

To extend the usability of Time Doctor, the software includes the ability to connect with more than 30 most popular project management software. So tasks carried forward from other programs can be tracked within Time Doctor. For example, Asana, Basecamp, GitHub, Teamwork, Google Apps, Slack, Citrix, LiquidPlanner, Yammer, etc. 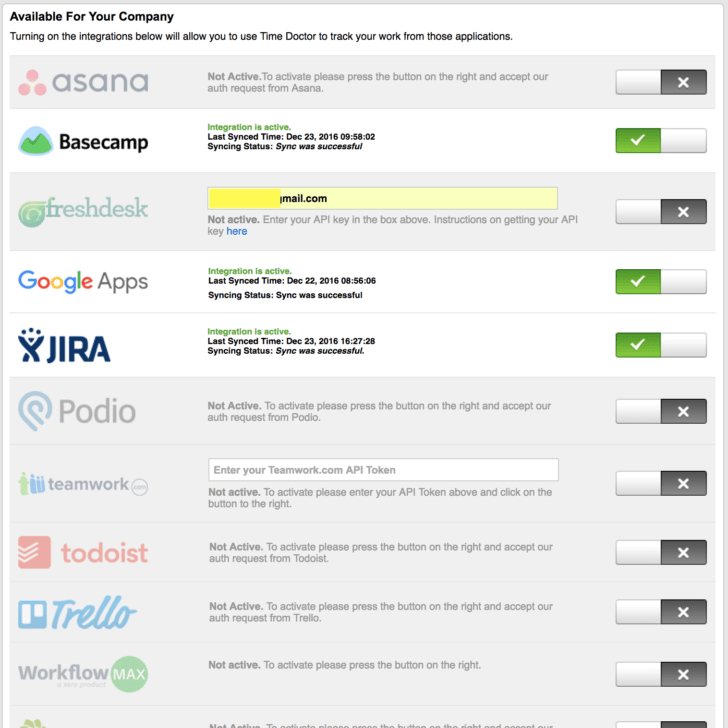 API settings are present on the server side of the software to allow users to connect their apps and monitor Time Doctor activity within their app. Supported formats are JSON and XML. The API interface supports time tracking commands as well as receiving the filtered information from the server. It’s possible to filter data by various parameters including time worked, screenshots, task lists, etc. 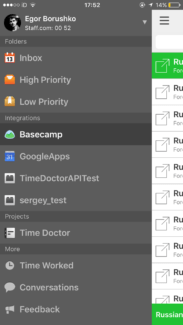 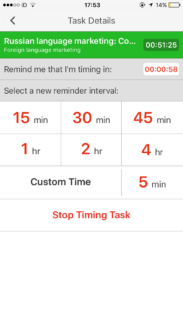 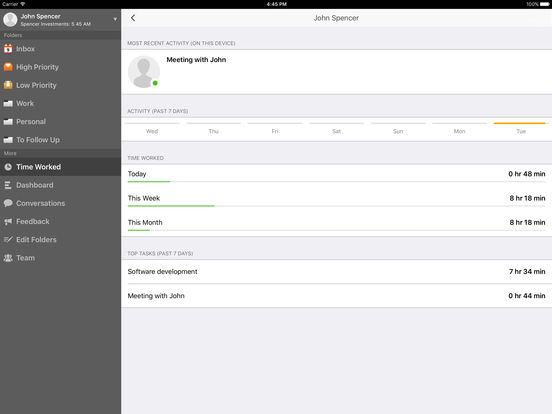 To improve the already existing mobile app, Time Doctor has recently added the GPS Tracking feature. This is a new feature for Time Doctor users on mobile devices – mobile phones or tablets. It’s mostly used by outbound/field staff on the move – couriers, sales managers, etc. Providing the employer has activated this feature, the app records GPS coordinates of the employee at any given time during the task. The mobile app gives the possibility to continue working on the move and to track time for various tasks directly from the palm. 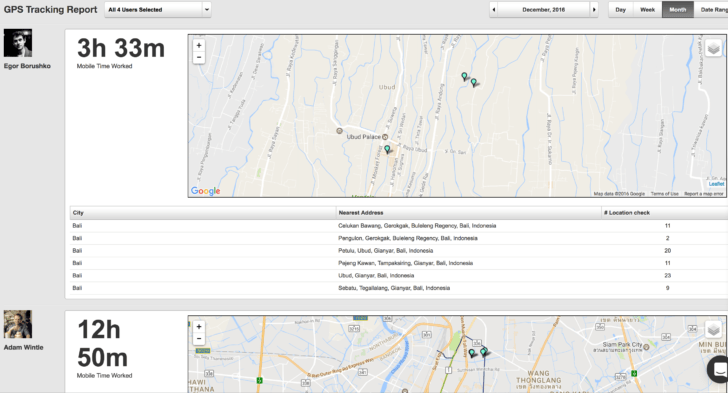