For most geeks who are keen to tweak their favorite Android ROM, a necessary tool is Xposed Framework. What makes it so appealing?

Xposed Framework is the most powerful tool for Android. It doesn’t provide any enhancement by itself, you need modules to make desired changes. Dedicated forums on Reddit, XDA Developers have been up and running for years and no single other app is capable of this prestige. It deserves the reputation since it has

Taking privacy protection as an example, before Xposed Framework, there’s already a solution for generating fake or custom information for sensitive data, such as device ID, IMEI etc. There were such privilege control apps (such as LBE), but it only prevents access. Since the modification to IMEI is against the law in some countries, users were not given another choice when an app demands device (and indirectly personal) identifiers. (The app force closes otherwise) PDroid were welcomed with cheers, since it’s the first shield to deal with those uncompromising apps. But it was rather obscure for general users to implement and had quite limited support for custom ROMs like MIUI. I didn’t make it to my device whatsoever, even I define myself as a tyro programmer and experienced user. But my respect to PDroid is firm. 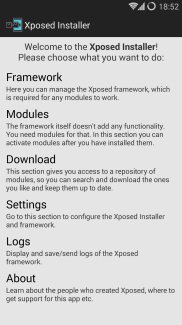 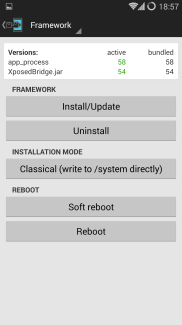 Coming to Xposed, all you need to do is a rooted phone and download the Xposed Framework installation pack in APK format, and install it as a normal app. It’ll not take more than 3 minutes. And just install two files into your system, reboot, then all is done. It is unimaginable 3 years ago when you needed a computer, a ROM and some scripts as well as hours of debugging and waiting. Isn’t Xposed imposing?

The more impressive show is followed: You don’t need to surf the web to hunt for appropriate modules. Xposed officially provides a repository for users to find modules they want.

Xposed support low-level tweaks, therefore there’re countless possibilities to apply. Be sure to backup from time to time. Although Xposed Framework is proven secure in most cases, modules are not guaranteed.

As the latest Android released, the author of Xposed Framework declared he’d try to implement it on Lollipop, but he has also admitted besides the massive work, another cause of delay was loss of motivation. Anyhow, as a pathfinder, rovo89, Tungstwenty have committed uncountable time in it to which this essay is just a drop of the ocean compared. It’s never overrated to say Xposed Framework is a milestone of Android, and it is definitely worth donation, help or simply “thanks”, despite its further maintenance.