Windows doesn’t officially provides many tweaks for normal users. Disk cleanup can be a hassle if you don’t have some handy tools to track which files take too much space. You definitely want to know what best apps are for this purpose.

Disk analyzer is a kind of software that helps you to find how files occupy your disk in various ways, tree graph or pie chart. “But Windows has disk cleanup”, you may ask. Most experienced users have had a hard time using this function and I believe most of them have given up. It only cleans certain paths, such as Recycle Bin, Temporary Internet Files, etc. Though the search paths can be appended, its function is considerably limited.

However, you may not want to download hundreds megabytes of installer for a simple lookup. That’s what Treesize and Foldersize are meant for.

3 versions are provided for TreeSize Free. The second and the third version are literally for the same use. In this review, I chose the installation version.

Both installation packs are small in size, less than 5MB. For most users, it’s even smaller than a song. No additional software is bundled, just click “next” and you’re good to go. One thing to note: for best access in need, select “show in context menu in Windows Explorer”, this will create a button in right-click menu. Much faster than you start the software and locate the path by yourself.

There, my system drive is almost full. Good time to find out what is the cause.

First, I’ll record the time consumed determining the space with the stopwatch on my phone. The way of launching the software is by right click context menu.

It’s quite clear that TreeSize Free is performing far well ahead of FolderSize.

In the free version of TreeSize, the only way to show the occupied space is the tree diagram, which its name also indicates. There’re two modes of viewing: detailed and simple. You can switch it by one click. The yellow bar clearly prompts the ratio of file / folder size. By default, the order is sorted by descending size. That means files / folders on the top are always bigger. You won’t miss big files with this trick. 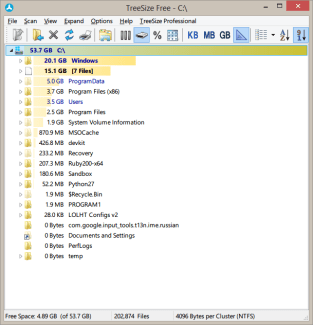 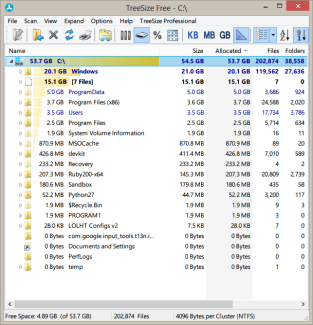 Folder Size provides 3 ways of visualization: pie chart, bar chart and percent progress bar. However by default there are a LOT of information, and you can’t find how to hide them on the user interface. Only experienced users are aware that you can change the column attributes by right clicking the columns. However, without proper instruction, it’s almost invisible to new users. 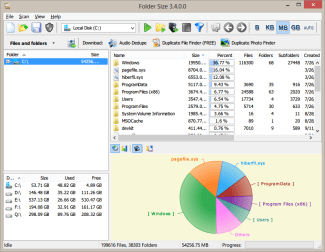 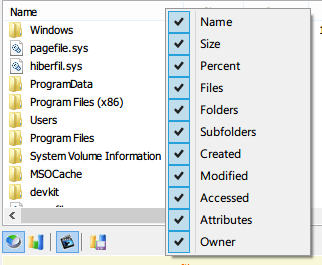 Both have automatic unit conversion. It acquires the best unit according to the folder you’re in. Also, the layout of percentage usage ratio needs an additional column, while Treesize underlays it, making more room for other infos. Any space is precious on the screen, Treesize definitely wins this round.

Coming to tests under real using circumstances. Within 2 clicks, Treesize points out WinSxS is the largest folder under Windows.

And for FolderSize, it’s almost a catastrophe to understand what happened. Can you tell me where is WinSxS located under? Notice the gray bar on the left? You now know WinSxS is under Windows, but you don’t know the upper folder anymore – all spammed by other folders.

Since WinSxS is an essential maintenance folder for the system, let’s see what is in another bulky folder. 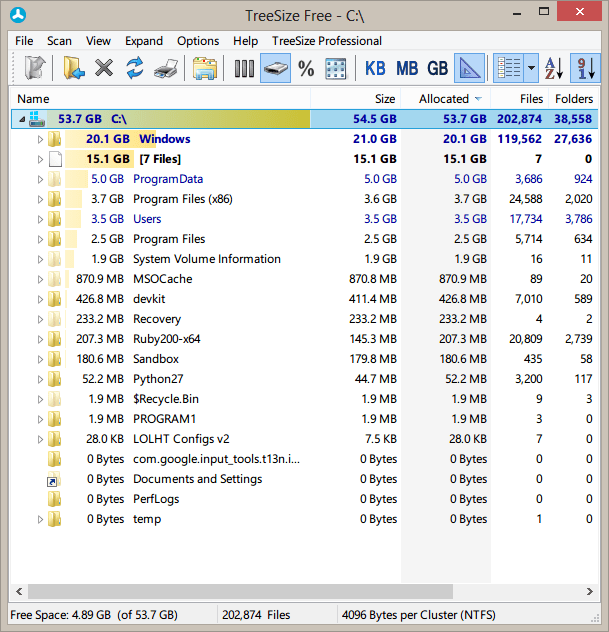 Earlier I’ve mentioned, by default, the order is sorted by descending size. That means files / folders on the top are always bigger. I just click the folder on the top, one by one, and those dmp files are there.

You can locate the files by either clicking the largest folder in the list, or by clicking the largest part in the pie chart. On this interface, it’s only known we’re in Kaspersky Lab under ProgramData. But that’s it. If you dig deeper, it’s assured a big trouble. The useless attribute columns (blank for files) take almost 40% of the table on the right, leaving a confusing queue of files with similar names.

You can select multiple files by Ctrl + left-click or select files in a row by Shift + left-click, same as in Windows Explorer. 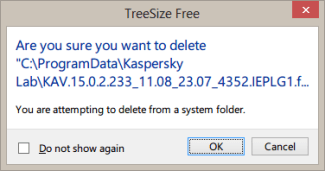 Both notify you when you attempt to delete files, but you can’t turn off the FolderSize one.

In every test, Treesize has advantages to be proud of, though installation pack being a bit larger (< 2MB). It loads the disk usage in a flash (compared to FolderSize). Its simplicity helps you find files that matter.  As not every file needs to be queried detailed attributes, you check the demanded one simply by mouse-over.

FolderSize seems to favor the older design, which larger objects must be sorted to the top. This can be a real problem in a complex folder with too many folders and files of different sizes. The two-step windows don’t pay off, but on the contrary, lead to a mess.

The final issue I want to highlight is in-app promotion. TreeSize has only one button for upgrading to professional version. It’ll not hinder your work if you click any button else. FolderSize has a row of promotion, whichever you click takes you to its official site. One exception is “export” button: 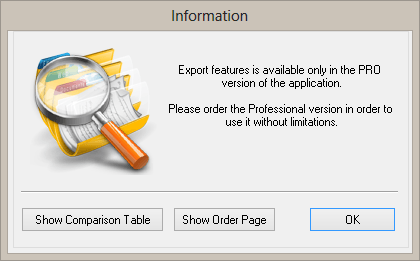 I believe the user can be more than frustrated to see this dialog when trying a function that appears to work.
What do you use for disk space analyzing? Do you have better alternatives for this task?