Google and Apple, a pair of old-aged competitors. The conflicts of interest have facilitated the situation where Apple gradually de-Googlizes. Google Keep, the relatively new service, has yet no client for iOS. Now what?

This app names “TurboNote”, but a closer look distinguishes what the fuss is about. 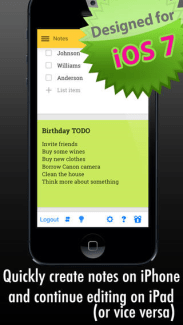 As it is presented with boom of statement “Designed for iOS 7”, the Keep interface looks so much tricky and immediately calls my suspicion that the so-called app is just a webapp – which may be heartbroken if you’ve already purchased it – it may run on any modern browser, desktop or mobile. This hypothesis is confirmed by Mike sooner, and even an alarm is not able to be created.

Let me explain for a better understanding: the modern webpages make use of a fashionable technology, called HTML5. It allows many more potential features to be implemented within a sole browser. E.g., you don’t have to install Adobe Flash Player anymore on the pages that support HTML5 video playing. There can be more elements on the page, not limited to traditional rectangles. And finally, it makes cross-platform experiences consistent and smooth.

However, webapp is still on test pilot. The weakest point for it is the obstacles of being waken on demand. It means you will never see an alarm clock app made in HTML5 going off when the webapp is closed.

Nevertheless, there’s another method that this app may use: API. API is like a button, you don’t need to learn what is inside the machine but click the right button. Information can be transmitted via API, too. However, Google doesn’t and won’t release the API of Google Keep.

Now you may have found out, this paid app is not in the slightest worth purchasing and we don’t recommend you to do so. You may accomplish the same tasks by simply using your desired browser. Thence, the second shortcut to access Google Keep is apparent: create a link for it and add it to your home screen.

We don’t know when the catfight between Apple and Android will end, but we do hope there’s always an alternative to choose from, though Google apps work best with Android, while iOS all-in-one service is still the very best solution for normal users.