Here I’d like to present you with an interesting comparison of how synchronization works in the four leading cloud storage services: Dropbox, Google Drive, OneDrive and LiveDrive.

I tested all the services by synchronizing files and folders between my laptop and the service’s web interface and recorded a video of each test. Note that I synchronized empty files and folders only. This means that the connection speed had almost no influence here. Later I checked the upload speed separately by uploading a 3.63 Gb file through the web interface and put it here for a reference only. It doesn’t affect the results of this particular comparison.

Eventually Dropbox became the favorite; Google Drive follows it, OneDrive is in third place and LiveDrive got last place. Why? Read the details below.

Dropbox demonstrated wonderful results. It almost instantly reflected all changes in my local folder to the web interface and vice versa. The Dropbox team was a pioneer in synchronizing local folders with cloud storage and it is still in the first place! I don’t know how they do it, but this is why I love Dropbox.

Google Drive also showed acceptable results. In both directions the synchronization took about 12-18 seconds. This is not bad in comparison with other services, but this caused another problem which is that it is possible to work with a folder on the web when it’s already removed locally. This causes the error messages shown in the video, but in general, Google Drive handled this situation properly. I must mention the impressive upload speed here. If had been a speed test, Google Drive would definitely be in first place.

* Personally I’m a devoted user of Google products and I do keep my files in Google Drive, but unfortunately I hardly can use Google Drive desktop application because of the following message: 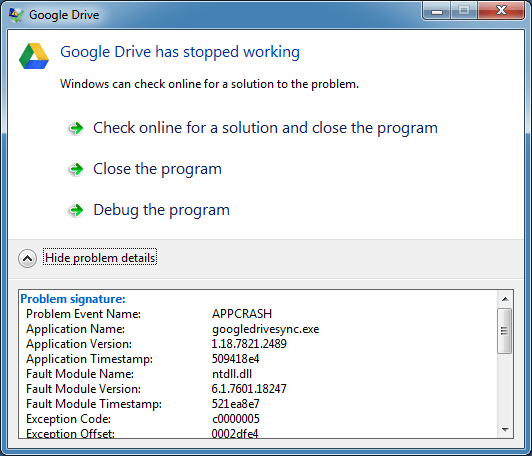 Though the web-to-local synchronization went in about 16 seconds, I’ve given LiveDrive the last place because it not only didn’t want to refresh the web interface automatically on local changes, but also (unlike Google Drive and OneDrive) it didn’t show any error prompts when creating folders and uploading files to a “zombie” folder. Livedrive simply ignored my actions without any reasonable explanation. Another thing that upset me is that it didn’t allow me to upload a file through a browser, constantly giving me an “Upload failed” result, so that I couldn’t eventually test the upload speed.

UPDATE: After publishing the article I’ve got an email from Robert Custons, the Marketing manager at Livedrive. He said that they are currently creating a new version of the Livedrive portal and software, which they plan to release in Q1 2015. This has an improved UI and does include more detailed error messages. The new version of the software would have made it clear why you could not upload the file in this specific scenario.

So what do we have as a result?