Don’t feel like to buy a wearable device, but eager to have a try of how working out with smart gears would be? Try Google Fit.

When Google showed off the Moto 360 watch on the stage, other tech companies knew it was time to attempt and slip on the thin ice of wearables on the tiptoes – yes, Apple was a noticeable example. The very first generation wearable devices are far from being “delicate”: Needs to charge from time to time, have to keep the Bluetooth on in daily life, ugly appearance, must wear 24/7, and most importantly, it’s even more expensive than a mobile device. (OnePlus One is only $199, but has the premium specs) It’s very likely that you hate the characteristics of the wearables, then why keep your mouth watering, jealous of the people who have the gears you don’t actually need? Why do you buy and regret, and be a tester other than a user?

Stop licking your wound, Google has an app for you. Just install it into your phone and forget about it. It simply works for you, while you even don’t feel it.

How does it work?

Google has introduced a new permission in Android system earlier, called Activity Detection. This permission allows your app to determine if you’re walking, running, riding a bike, or in a vehicle. The detailed API constants are listed below.

And the following graph shows how acceleration changes during walking: 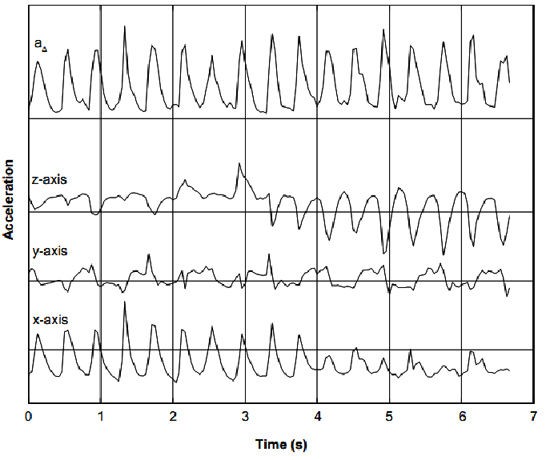 So, first rule to use a pedometer: wear it correctly. For phones, put it into your pockets in your pants (or tie it on an arm, if you are ready to look like the guy in commercials); for bands, wearing as a watch is better than wearing as a necklace.

The running detection is similar, accelerated pace is only difference.

When riding a bike, your leg draws circles. If you’re using bands, or tying it on your arm (Really?!), it’s presumably not going to be properly tracked, as the devices are not on your legs. (It can be detected by speed and location changes, though)

And finally, in a vehicle. Your legs just move irregularly and you are in a (relatively) high speed.

You set one goal, Google sets the other 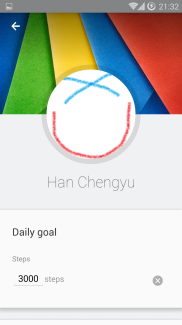 I set the goal to 3000 steps, 1/5 of most people normally do. (Kids, don’t try this at home :D) You may either set the time you want to spend in exercising, or set the steps you want to make every day. Once you’ve set one, the average value of the other will be automatically calculated, for your reference. There are two goals you need to meet daily:

And apparently, by this way you will walk more than the last day, and it’s an invisible inspiration for you to keep working out and working harder. 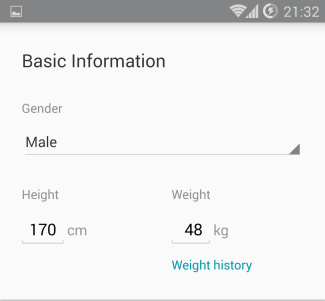 I am rather a tiny soul, and different to most goals of exercising, I intend to get heavier. (Getting taller seems impossible, if you have any app that can stretch me taller, I’ll do a review immediately)

There I fill in my height and weight. Google guessed my height will not change drastically, it doesn’t even put a button named “height history”.
I don’t know if the weight history is really meant for both losing and gaining weight. The scrawny also need some love. 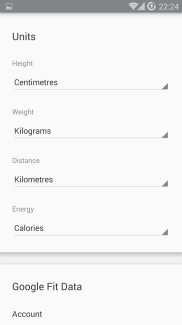 The units are not based on where you live, you have to manually pick the one that fits you. Often if an American has a fever, people from other countries have to call the fire fighter – if you don’t take units into account. So be sure you set this up. 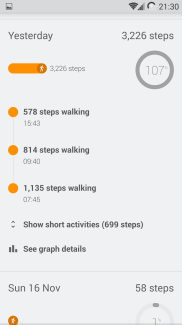 Unlike some other apps, Google Fit doesn’t use GPS to track steps, which saves a lot of battery life. However, don’t expect to see Fit tell you the steps as you are on the move. Fit is not designed so. The right way to use Fit is, you don’t use it, you check it.

After a day’s walk, I’ve met the goal I set for myself, but barely the one that Fit scheduled.

On the interface, walk is indicated by an orange bar, with a stickman trying to evacuate. Besides the displayed walking records, some are collapsed. That is because short activities, or in another word, discontinuous moves. Maybe Han just wanted to stand up from the chair and wander in the room while thinking what to write for a review today. 🙂 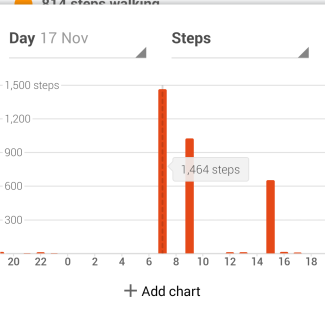 By tapping on a displayed record, a precise graph is shown. In this graph, Han woke up before 8 and walked to classroom. After the course had been over, he returned his dorm. The resolution of the graph is 1 hour, enough for most users. 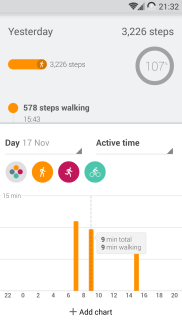 You can also view by active time, which shows what activities you’ve spent time on. I neither have a bike, nor do I like to move fast. Therefore only walking was logged. But as I deduced, it should be able to track other activities as well.

Google Fit is a great app for now, when wearable market is still immature. If you’re enthusiastic about keeping fit, and meet any of the following conditions: 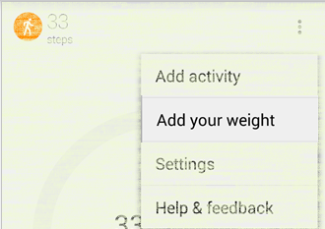